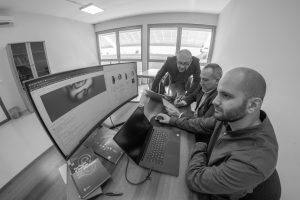 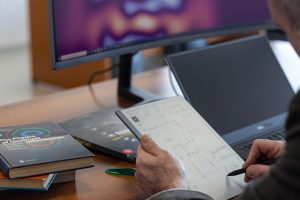 Their curiosity-driven scientific work aims to study puzzling quantum effects resulting from the interaction between matter and light.

The trio shares the idea that branches of knowledge are often too stubborn to maintain their independence.

Their artistic exploration began in 2015, when two of them, observing a simulation of the thermalization process of a quantum superposition state, were pervaded by a feeling of sadness, a sense of decay. This experience reinforced their visionary intuition that the same quantum processes and effects that are driving the quantum information revolution have striking similarities to the richness, uniqueness, and multiplicity of our inner self.

For years they have held monthly afternoon "experiments", sessions in which they enjoyed linking quantum mechanics with digital art. In 2020, Alberto Mercurio joined the team embracing both the scientific and artistic activity with enthusiasm and energy. His enthusiasm and his technical skills are driving the break out of their visionary insigћt project.

The team coordinator Salvatore Savasta graduated in physics in 1992 from the University of Pisa and received his PhD in 1996 from the University of Messina, where he became permanent staff in 2001, and full Professor since January 2021. Prof. Savasta has mainly worked on quantum optics and is co-author of over 100 publications in scientific journals. In the last years, he spent, several months at Riken (JP) as visiting researcher and is involved in scientific collaborations with physicists of several countries and institutions as Chalmers University of Technology (SE), Queen's University (CA), Universidad de Zaragoza (ES), University of Southampton (GB), University of Pisa (IT). His h-index is 33 according to google scholar and 30 on Scopus. He is co-author of several papers on high impact factor journals. Among them, he published twelve papers on Physical Review Letters, one on Nature Physics, one on Nature Review Physics, three on ACS Nano, one on Phys. Rev. X.

Omar Di Stefano graduated in physics in 1997 from the University of Messina and, after receiving his PhDs in physics and mathematics, he worked in the field of solid state physics and quantum optics. Before joining a position @unime, he was also researcher at Riken in Japan for 16 months. He is a long term very active collaborator of Savasta. They share co-authorship of several scientific papers. Recently, he achieved the national habilitation for full professor, both in theoretical condensed matter physics, and theoretical physics of fundamental interactions. His h-index is 26 according to google scholar and 24 on Scopus. He was also a rugby player (flanker) for more than twenty years.

Alberto Mercurio is a professional Hip Hop dancer, an astrophotographer and a Ph. D. student in physics at the University of Messina. His career as a dancer began in 2006 and over time he has achieved numerous results such as the second place at Street Fighters in Cesenatico (2014), the first place at SDK Italy in Rome (2015), the second place at Ocean Battle Session in Taiwan (2019). He also represented Italy at the international event The Dance in Switzerland (2017) together with the group Mnighty Force. Astrophotography is his second passion. He photographed several celestial objects, from the nearest planets to the distant galaxies and nebulae (Andromeda galaxy, Orion Nebula, Whirpool galaxy and many others). Currently he is a Ph. D. student at University of Messina. His activity is mainly focused on quantum optics and cavity quantum electrodynamics with artificial atoms or electrons in lattices under extreme light-matter interaction regimes.